Xiaomi is preparing a new round of smartphones for release in the coming months. Apart from a Xiaomi 12 Ultra, the company is also preparing new Xiaomi 12S series smartphones. These smartphones are also set to bring the Leica branding and have passed by 3C certification recently. Today, the vanilla Xiaomi 12S smartphone has made its way to the Geekbench benchmark. The device passed through the popular benchmarking platform with the 2206123SC model number as the 3C listing.

As per the leaked listing, the Xiaomi 12S will come with the Qualcomm Snapdragon 8+ Gen 1 SoC. That is the same chipset allegedly coming with the Xiaomi 12 Ultra. This processor has been introduced by Qualcomm last month and brings significant improvements in energy consumption and thermal management. In addition to the newer processor, the phone will have up to 12 GB of RAM. We can’t discard other variants, but Geekbench only confirms this particular version. Obviously, the phone runs Android 12 and will certainly bring MIUI 13 running on top. 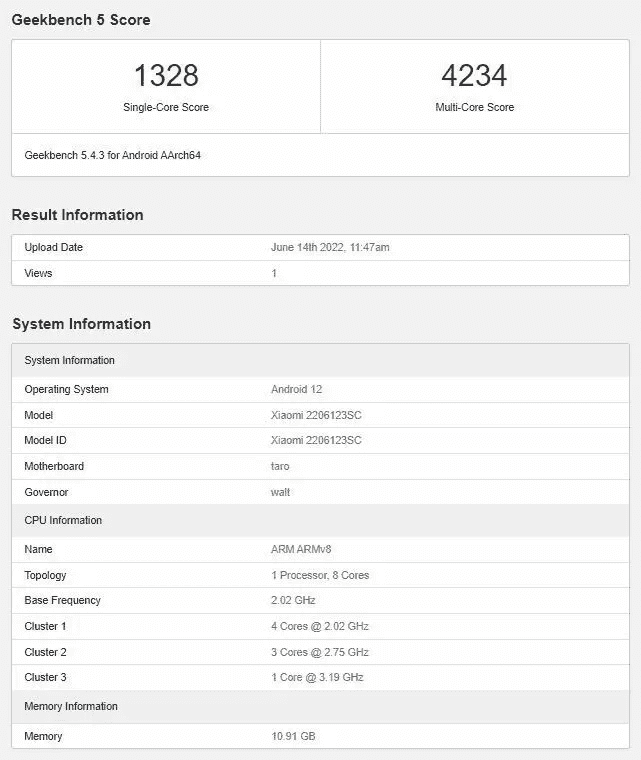 The Xiaomi 12 scored 1,328 points in the Single-Core tests and 4,234 Multi-Core departments. The 3C listing from earlier this month revealed that the device also comes with 67 W fast charging. The Xiaomi 12S is said to pack a 120 Hz OLED display with a 50 MP main camera with the aid of Leica. We expect a big battery to complete this package. There will also be a Pro variant, that will come alongside the vanilla 12S. Curiously, this one will come in two flavors – one with Snapdragon 8+ Gen 1 SoC and another one with a Dimensity 9000 chipset.