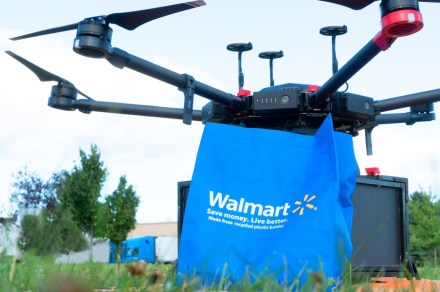 Walmart first revealed its interest in drone delivery five years ago. Since then it’s been conducting a number of pilot schemes, its most recent one close to its headquarters in Bentonville, Arkansas.

Now ready to take it further, Walmart has just announced it’s planning to expand its drone network to 34 new locations by the end of the year, taking in a number of Walmart stores in Arizona, Florida, Texas, Utah, and Virginia.

Walmart is working with Virginia-based drone delivery specialist DroneUp to build out its airborne delivery platform.

The retail giant said the move gives it the potential to reach four million U.S. households across its new locations and could see it deliver as many as one million packages by drone each year. However, with the aircraft only flying to customer addresses up to 1.5 miles from each store, it may be a while before those numbers are fully realized.

Customers eligible to be a part of the pilot scheme will be able to use a mobile app to order from a list of “tens of thousands” of items between 8 a.m. and 8 p.m., with delivery guaranteed within 30 minutes of hitting the “buy” button. The total weight of the package will have to be under 10 pounds, and a delivery fee of $3.99 will be charged.

An ordered item will be loaded onto the drone at the store’s hub and sent on its way. On reaching the customer’s address, the drone will use a cable to lower the item into their yard or nearby spot for collection.

“After completing hundreds of deliveries within a matter of months across our existing DroneUp hubs, we’ve seen firsthand how drones can offer customers a practical solution for getting certain items, fast,” Walmart said in a release.

It added that while it initially thought customers would use the drone delivery service for emergency items, it’s discovered that folks are also using it for more general items due to the “sheer convenience” of the speedy service.

Walmart stores selected for drone deliveries will build a DroneUp hub run by a team of certified pilots operating within FAA guidelines to ensure safe flights. This means that unlike competing drone delivery platforms being developed by the likes of Alphabet’s Wing and e-commerce behemoth Amazon, Walmart’s delivery flights are not autonomous and so must take place in the line of sight of the pilot at all times.

This explains why drones can only fly as far as 1.5 miles from a participating Walmart store, severely impacting the scope of the service. Autonomous drone flights over longer distances are limited by extra FAA safety regulations, meaning it could be some time before such long-distance services are rolled out more widely. Digital Trends has reached out to Walmart to learn more about its plans for autonomous drone flights and we will update this article when we hear back.

As part of broader plans, Walmart said that DroneUp will also offer local businesses and organizations other drone services that could include everything from aerial photography for constructions sites to emergency response flights.