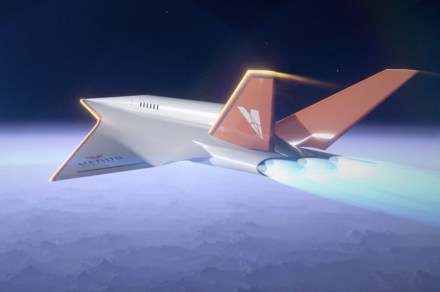 If time is of the essence, then the idea of traveling to a future vacation spot aboard Venus Aerospace’s hypersonic plane may appeal.

The Houston, Texas-based company this week shared renderings of a hypersonic passenger plane called Stargazer that it’s aiming to build for commercial use. You can check out the design in the video below:

The aircraft will carry 12 passengers at speeds of up to Mach 9, which is just shy of 7,000 mph. To give that some context, the company is teasing the idea of flying from Los Angeles to Tokyo inside 60 minutes, though at those kind of speeds you could pretty much fly anywhere you like in that amount of time.

While Venus Aerospace is describing the Stargazer as a “space plane,” its maximum altitude will be 170,000 feet (around 52 kilometers), far below the Kármán line, the point 328,000 feet (100 kilometers) above Earth that’s generally considered as the point where space begins.

It’s not clear when Venus Aerospace hopes to have a a full-scale prototype ready, or indeed when it imagines the aircraft might be ready for commercial service. It says it’s also hoping to build a hypersonic drone, though no renderings have yet been released for that particular vehicle. Digital Trends has reached out to the company for more information and we will update this article when we hear back.

Since its founding in 2020, Venus Aerospace has picked up $32 million in private funding, plus a further $1 million from the government, to help it meet its goal of fully developing its high-speed aircraft.

Venus Aerospace’s team comprises aerospace, military, and research and development veterans who are currently focusing on three main areas, namely a zero-emission, next-generation rocket engine; an innovative aircraft shape; and a leading-edge cooling system that will allow the Stargazer to take off from existing spaceports without the need for any new infrastructure.

The company said it has “scaled fast” over the last year, adding that it has “designed and built its tech demonstration engine, executed key experiments at hypersonic wind tunnels and propulsion test facilities throughout the U.S., and started a ground test campaign at Spaceport Houston.”

Another outfit with its sights on high-speed aircraft travel is Colorado-based Boom. The company is continuing with work on the development of the Overture, a supersonic plane designed to carry up to 75 passengers and fly at speeds of Mach-1.7, about twice the speed of today’s fastest airliners. While it still has plenty of design work and testing ahead of it, United Airlines is so interested in Boom’s plan that it has agreed in principle to purchase up to 50 of the aircraft with a view to putting them into commercial service in 2029.