Twitter’s head of security and integrity, Yoel Roth confirmed the current situation of Twitter employees. Since Elon Musk took over, there have been uncertainties regarding who stays and who goes. Yoel Roth confirms that about 50% of its employees lost their jobs yesterday. His tweet reads

“Yesterday’s reduction in force affected approximately 15% of our Trust & Safety organization (as opposed to approximately 50% cuts company-wide), with our front-line moderation staff experiencing the least impact”. However, he claims that this did not affect over 80% of the content review volume team. This suggests that the core functions of the company remain intact.

In the company’s massive layoffs on Friday, several key parts of Twitter were badly affected. Among the hardest hit were the teams responsible for product and advertising engineering. The infrastructure team (internally called Redbird) were also badly hit. Furthermore, many employees at the corporate communications team responsible for running data centers lost their jobs.

Several employees can not access their company email addresses at the moment. These are probably those affected by the layoff.

Some employees claim that they can no longer access the system overnight. This is happening even before the finalization of the sack

“Looks like I’m out of a job. The company just remotely logged me out of my work laptop access and kicked me out of the Slack channel,” tweeted Simon Balmain, a former senior community manager at Twitter. “Always united. I love you both so much. It’s such a shame it ended this way.”

Balmain lives in the UK but is part of Twitter’s Los Angeles office and works remotely for a few hours a day. In an interview, he elaborated on the process of his dismissal.

“Everyone got an email saying the company was going to make massive layoffs,” Balmain said. About an hour later, employees’ laptop access started being logged out remotely, along with Slack channels and Gmail company mailboxes”.

Rumman Chowdhury, Twitter’s head of machine learning ethics, posted a screenshot showing that he was no longer able to log into his work account.

Choudhury added: “Imagine the relief you feel when you’re the target of the big villain Thanos.” 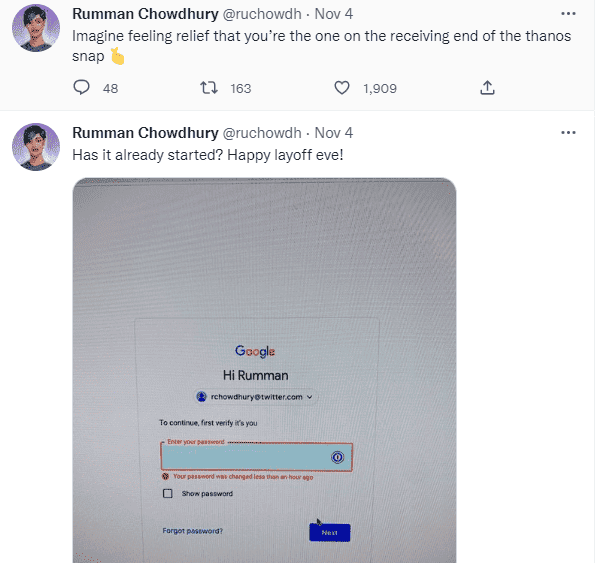 “Well, it’s true,” wrote Lauren Pinella Trelor, Twitter’s former head of onboarding support, “We’ve received layoff emails from the company. The experience and the sense of solidarity are unforgettable. The best days may not yet come, and I’m really sad right now.”