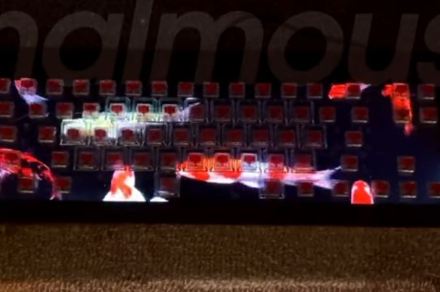 Have you ever wanted to own a keyboard that has its own CPU and GPU? No? Well, it’s almost here regardless, and it’s a lot cooler than it sounds.

A video of an upcoming keyboard has emerged, showcasing something far beyond the usual RGB lighting seen in gaming keyboards. This keyboard, equipped with its own hardware, can provide you with a fully interactive set of skins — such as the colorful fish seen in the video below.

A keyboard never before seen has officially been leaked. The supposed Alpha Prototype from @Finalmouse is set with groundbreaking technology. A keyboard with completely interactive skins built on Unreal Engine 5… wtf pic.twitter.com/p9HhuN4DZr

Some gamers are particularly picky about their keyboards. For some, only the best mechanical keyboard will do. Others value fancy RGB lighting that complements the rest of their build on an aesthetic level. Others may not care at all and just want something that works. No matter which category one falls into, it’s hard not to appreciate when something entirely new appears in the oversaturated market and breaks up the current trends in a fun way.

This keyboard is definitely one of those boredom fighters that challenge the standards by kicking things up a notch. First spotted in a tweet sent out by Jake Lucky, the keyboard is supposedly a leaked alpha prototype made by Finalmouse. If you watch the video, you’ll quickly see why it seems so special — it supports fully interactive skins prepared in Unreal Engine 5.

In the video, you can see colorful fish swimming across the keyboard, sliding from the keycaps to the board itself seamlessly. According to the video, these skins are completely interactive. It seems that upon release, the skins will be available through the Steam app, with the option for artists to add their own at any given time. Noninteractive skins will also be possible, and those will rely on a “traditional video format.”

All this is made possible by the processor and graphics card that are housed within the keyboard. Although we don’t know their specs, we do know that they’re there, and the keyboard only requires a USB-C connection in order to run and transmit both power and data. It runs at 8KHz and will support 2K/4K display options.

Keycaps already on there in video… we urge everyone to wait until December 17th before speculating too much. There’s a lot more to this and the final product is on a different league…. Far too many details that are still unknown. What you are seeing is from nearly a year ago

Finalmouse acknowledged the keyboard in a cryptic way, asking its followers to wait until December 17 before making any judgment calls. While the general response to the keyboard on Twitter has been positive, there are some concerns about the price. No wonder — such a keyboard could easily end up costing north of $500, and possibly even close to $1,000.

While this prototype is clearly going to be a fairly niche product, it’s always fun to see something new. Let’s hope that Finalmouse will reveal more about this gadget shortly.