The Tecno Pova 3 smartphone’s India launch could be around the corner. A teaser for the handset is now live o Amazon India. Tecno Mobile is prepping to unveil a new smartphone dubbed the Pova 3 in India. Tecno launched the mid-range smartphone in the Philippines last month. The mobile phone manufacturer has confirmed the Pova 3 is coming to India. Also, a microsite for the device has gone live on Amazon.

The microsite gives us a glimpse into the handset’s design. Moreover, it sheds some light on the Tecno Pova 3 specs. The Pova 3 uses a mammoth 7,000mAh battery to draw its juices. Moreover, it has a triple rear camera setup. Upfront, the phone sports a 6.9-inch display with Full HD+ resolution. However, the company is keeping the Tecno Pova 3 smartphone’s India launch date under wraps. The brand currently has the Tecno Phantom X smartphone available in India. 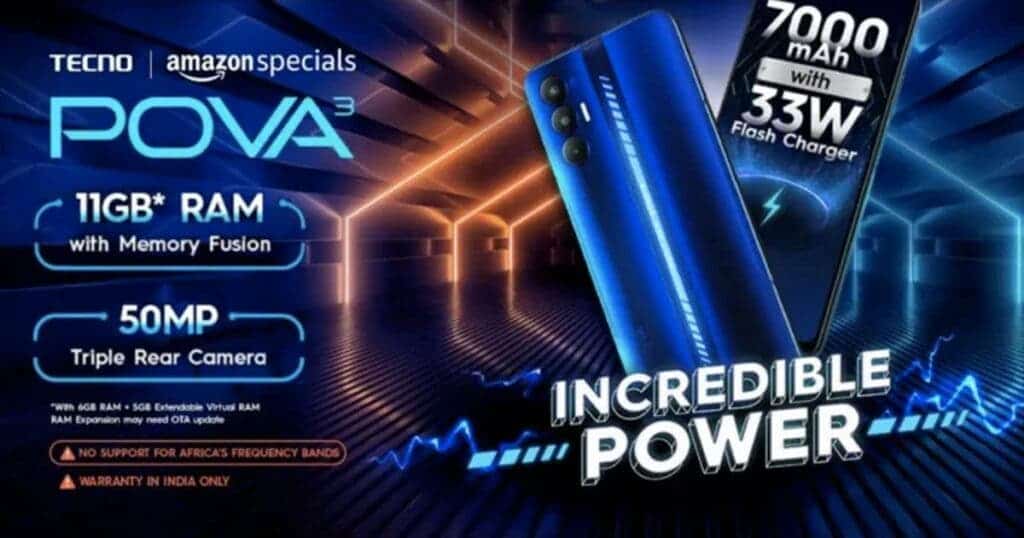 The Tecno Pova 3 has already bagged the BIS certification with model number LF7. Also, Tecno has officially confirmed the design of the handset. The teaser shows two color options for the Pova 3. It will come in Blue and Silver color options. Past leaks suggest that the Black color variant will also go official. The rear panel has a dual-tone finish. There’s a vertical stripe in the center of the rear panel. The Pova 3 adopts a highly appealing outward appearance.

Also, the Tecno Pova 3 comes with sufficiently good specs. For instance, it sports a 6.9-inch display with Full HD+ resolution. The image of the phone on the microsite shows a thick chin on the bottom. Tecno could use an IPS LCD panel for the Pova 3. Under the hood, it packs an octa-core MediaTek Helio G88 processor. Moreover, the handset features a Mali G52 GPU for graphics. The handset will ship with 6GB of RAM and offer 128GB of onboard storage capacity.

Further, the teaser confirms that the Pova 3 will offer virtual RAM of 5GB. Also, the new Tecno phone has an impressive camera setup. The rear panel house three sensors, featuring a 50MP primary camera. It could also get an 8MP ultrawide camera. Moreover, the Pova 3 will probably house a 2MP depth camera on the back. Upfront, the handset is likely to use an 8MP shooter for capturing selfies. This front-mounted camera will facilitate video calling as well. 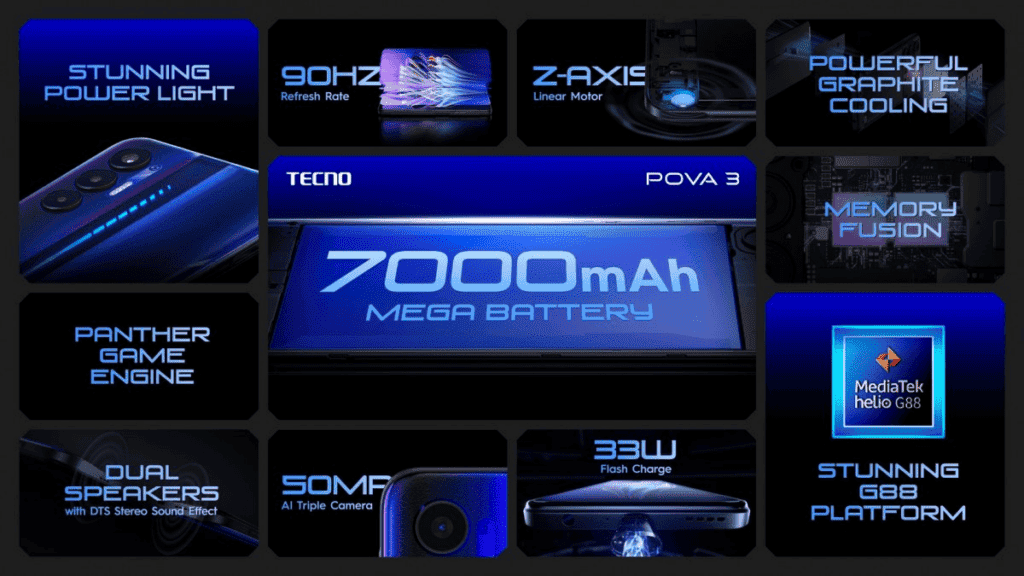