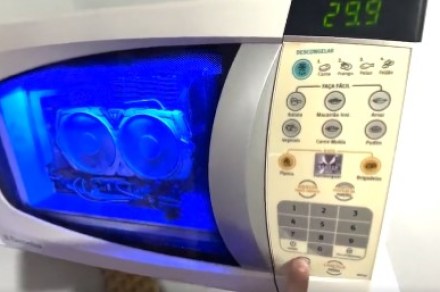 We’ve seen PC builds using vintage radios and even concrete, but now we’ve found a guy who built a PC out of his microwave. You read that right. Despite all the warnings about putting metal in a microwave, someone stuck an entire computer in there.

Jake Lucky posted a video on his Twitter of a Brazilian man who built this PC monstrosity after losing his job. The video shows a guy opening a run-of-the-mill microwave door to show off a GPU, fans, and a motherboard, all lit by RGB lighting.

He built this fully operational for just $900 pic.twitter.com/UxRRtqgtcl

“What’s really cool?” Lucky explains in his tweet thread. “His girlfriend gave him the money to make the build while he was looking for a job.”

“I am now actively working with a computer company to get them a matching his and hers dual microwavePC setup :),” he adds

There is not much information on the build itself, except that it cost $900. PC Gamer guessed it is most likely an Asus A320M-K motherboard, given the brief glimpse of it in the video and its price point. We’re not sure how the man who built it is able to control temperatures inside the microwave. Those things are designed to carefully control air flow and you will not find many vents on a microwave oven.

Lucky continues his thread with a call for people send him pics of their craziest PC builds. Some of what comes in is absolutely glorious. One person named Trop showed off his all-wooden PC case, while Linus Tech Tips responded with, “If this Tweet gets 1 like, I will build a PC.” He got 14,000 likes.

If you’re in need of a new PC, you don’t need to build one in a microwave. You can hit up early Black Friday sales, like this RTX 3060 gaming PC at Walmart or an Alienware Aurora from Dell.