Samsung Galaxy A04s will be one of the next cheap smartphones of the South Korean giant, and apparently it will mount a proprietary Exynos SoC, specifically the 850 presented just two years ago and that we have already seen on board other devices of similar range, such as the Galaxy A13 and the Galaxy M13. To reveal it we have Geekbench benchmark tests.

The device was spotted on the well-known benchmark platform a few hours ago. Or rather: MySmartPrice colleagues say they have spotted it. For some reason, at the moment the smartphone, codename SM-A047F, has disappeared from the database, however the magazine is a reliable source and has shared a screenshot – which yes, we know it’s easy to fake, but it seems extremely unlikely.

Do you remember what it was like to use an HTC One M8 ? The question may seem strange but that is the level of power that the Exynos 850 offers the user. More precisely, the scores in single-core are in line with those of a Snapdragon 801, while in multi we are even a little bit above a Snapdragon 810 – top-of-the-range chip from 2013 and 2014 respectively. The processor consists of eight Arm cores Cortex-A55 with a maximum operating frequency of 2 GHz, and is flanked by an Arm Mali-G52 GPU. Production on the 8nm process should be a nice efficiency advantage over the two Snapdragons mentioned above which were at 28 and 20nm.

The images above, which emerged on the Net a few days ago just, illustrate how the device should be; the usual OnLeaks made them based on the CAD files; probably the same ones sent to the enclosure manufacturers, so they are not official in any way; but they are in all likelihood very, very similar to reality. Among the salient details there are triple rear camera, Infinity-V display (ie with central “mini notch”), USB-C port and 3.5 mm audio jack. Geekbench also unveils the RAM, equal to just 3 GB. The smartphone will launch in the coming weeks. 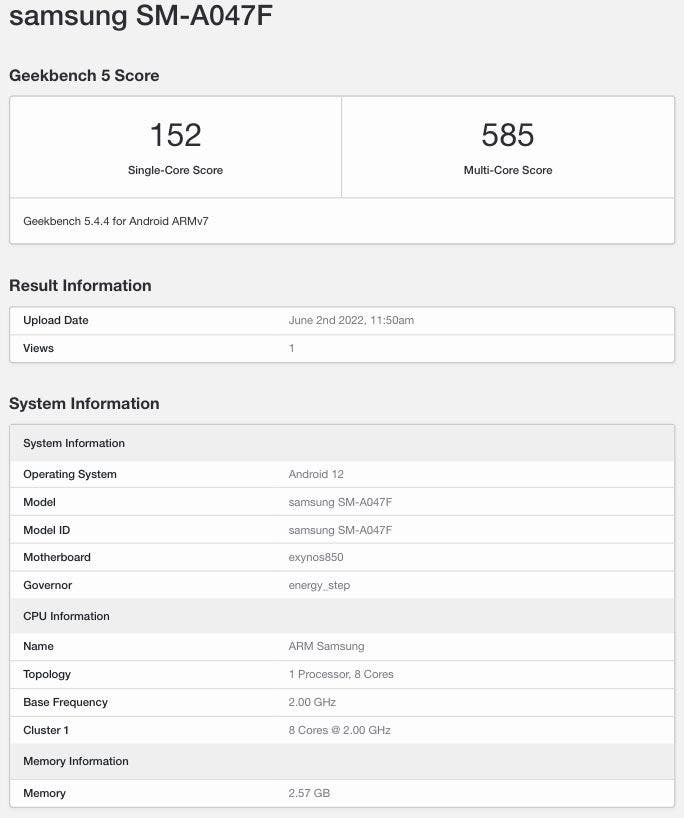 Samsung is preparing another version of its cheap Galaxy A13 smartphone. Recall that the A13 4G was available since March, and the A13 5G launch took place back in December.

The performance difference between these models is huge; as the former is based on the Exynos 850 and the latter is based on the Dimensity 700. Apparently, Samsung decided that it needed to release an intermediate version. It will also support only 4G, but will already receive a Helio G80 platform; that is already more productive than the Exynos 850. If we operate with AnTuTu benchmark data, then the latter is more than one and a half times faster.

Everything else in the new model will remain unchanged; that is, it is a 6.5-inch 90-Hz HD + screen, a 50-megapixel main camera and a 5000 mAh battery. It is likely that the new version of the Galaxy A13 4G will be available in some markets where the current one is not currently available.