Realme has recently confirmed the arrival of the Realme GT Neo 3T on the market. The company teased it as “coming soon”, and apparently, sooner than we’ve been expecting. Shortly after confirming the device’s existence, the brand is scheduling its launch for June 7. The new variant for the Realme GT Neo series will reach Indonesia on June 7. Worth noting that it’s not available in China, so Realme has decided to make this a global smartphone first. The company will also take the opportunity to introduce the Realme GT Neo 3 in that market. The event will be live-streamed through the company’s YouTube and Twitter handle from 8:30 AM Jakarta time.

The Realme GT Neo 3T is slightly different from the original device. Unlike other “T-series” phones, the device actually sits below the Realme GT Neo 3 in terms of specifications. The new variant packs the Qualcomm Snapdragon 870 SoC. This processor is being the favorite choice of many OEMs this year, and the Realme GT Neo 3T is the latest to bring it to the market. The phone probably will bring up to 12 GB of RAM and 256 GB of Internal Storage. Anyway, a Geekbench benchmark confirms that the device will have a variant with 8 GB of RAM. 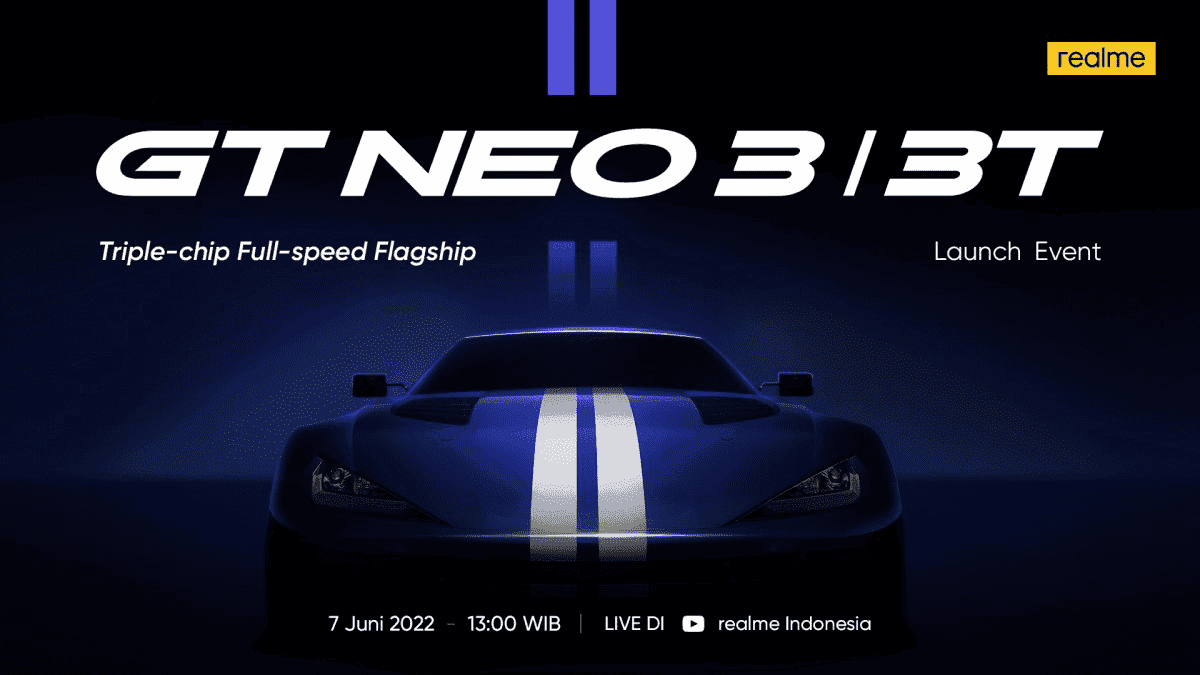 The Realme GT Neo 3T will have a different design. The phone’s display will be smaller with a 6.5-inch diagonal, and there will be a top-left punch-hole for the selfie camera. After debuting the first center cutout on the Realme GT Neo 3, Realme returns to the old formula. Anyway, the panel will be AMOLED and we can expect a Full HD+ resolution with 2,400 x 1,080 pixels and a 120 Hz refresh rate. The device’s teaser render confirms a regular power button. Thus, we expect it to bring an in-display fingerprint scanner. The phone will bring a large battery, and we can expect up to 80 W fast charging. We’re not expecting this variant to bring the 150 W charging found in the Neo 3.

The Realme GT Neo 3 will also launch in the market. The device has a 6.7-inch AMOLED screen with Full HD+ resolution and a 120 Hz refresh rate. It has a triple-camera combo led by a 50 MP Sony IMX766 camera with OIS. Under the hood, it brings a newer MediaTek Dimensity 8100 SoC with up to 12 GB of RAM and 256 GB of Internal Storage. The company recently launched a variant with 512 GB of storage, but we don’t know if it will land in Indonesia. There’s also a Naruto edition, but no word on international availability just yet. The device has two versions: one with 150 W charging and 4,500 mAh battery, and another one with 80 W charging and 5000 mAh battery.