The OnePlus 10T (OnePlus Ace Pro) will officially arrive on the market on August 3rd. However, the Chinese manufacturer is working on another flagship smartphone. According to reports, OnePlus’ new flagship phone with model number CPH2413 is now on the Geekbench database. There are speculations that this device is the upcoming OnePlus 10RT. The GeekBench database reveals that this smartphone comes with 8GB of RAM and pre-installs the Android 12 system. Recent reports suggest that the device has also received BIS India certification. 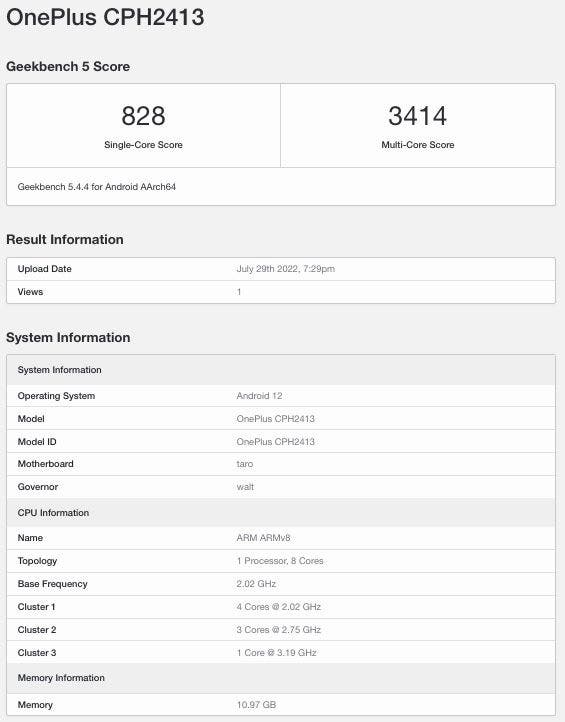 On GeekBench tests, this device scores 828 points in the single-core test and 3414 points in the multi-core test. Furthermore, there are speculations that the OnePlus 10RT will come with a 120Hz AMOLED display. This flagship smartphone will also use a triple rear camera setup which has a 50MP main camera as well as an 8MP camera, and a 2-megapixel camera. On the front, the OnePlus 10RT will come with a 16MP shooter ad the device may also support up to 150W charging.

There have been a few leaks regarding the OnePlus 10RT. In addition to the features above, there are reports that the OnePlus 10RT is in internal testing in India. This smartphone will come with up to 12GB of RAM and 256GB of internal storage. The OnePlus 10RT will run OxygenOS 12 on top of Android 12. As for the available colour options, this device will be available in green and black colors.

According to recent exposures, the OnePlus 10T will arrive next month. However, itis still unclear when the OnePlus 10RT will be released.

In fact, as early as May of this year, Li Jie, president of OnePlus China, claims that the three-segment button will remain on the digital series. However, he also confirms that this feature will not be part of the Ace series. The company hopes to bring the “extreme experience” in performance and gaming to the Ace series. The mute slider has been a staple of OnePlus’ flagship phones for years, offering a quick and easy way to put the phone in silent and vibrate mode without having to tap any on-screen menus. 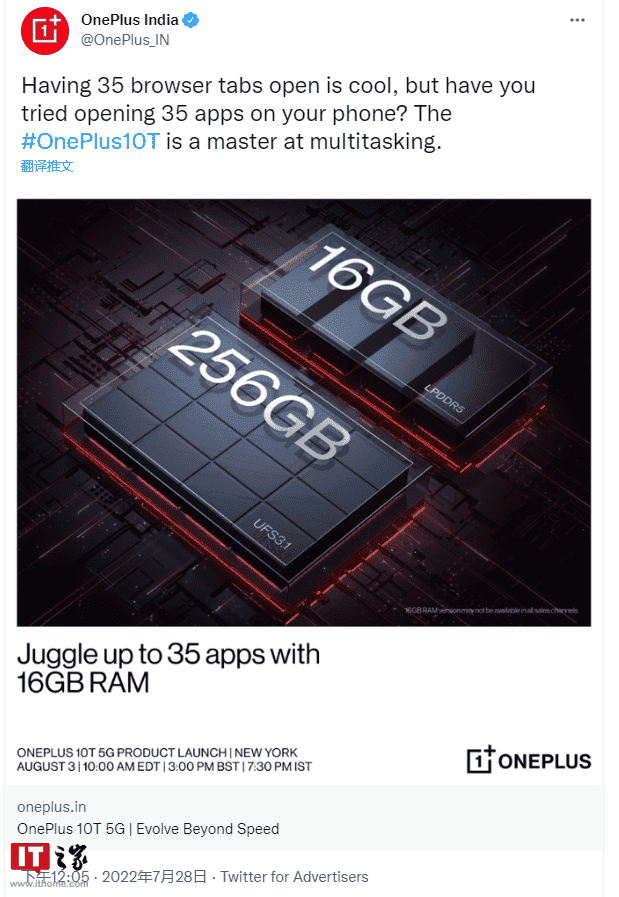 According to The Verge, OnePlus chief designer Hope Liu said ditching the mute slider allows the OnePlus 10T to have enough interior space to accommodate other components needed for “high-power charging, large battery capacity, and better antenna signal,” which is a necessary practice.

“Although the mute slider looks like a very small component, it actually has a considerable impact on the device’s motherboard area – taking up 30 mm²,” Hope Liu said. “To ensure that the OnePlus 10T serves the areas that users value the most… While retaining the mute slider, we had to stack the device’s motherboard, which would make the device thicker”. Thus, OnePlus had to compromise to make space available.

Another difference between the OnePlus 10 Pro and the OnePlus 10T is that the latter lacks a Hasselblad camera system. The collaboration between OnePlus and Hasselblad started with the OnePlus 9 Pro. At the time, there were tweaks to the colour of the camera. However, this year, the cooperation adds some new features like the 12-bit RAW photos support.

Thus, many users are wondering why OnePlus is not using the Hasselblad camera brand. Hope Liu said that OnePlus “hopes to provide a flagship smartphone with an extreme performance at the price point of the device choice”. Liu also confirms that the OnePlus 10T main camera will use a 50-megapixel Sony IMX766 sensor and will support 10-bit color shooting. The camera will also support better HDR Photography and Night Photography modes. In other words, the Hasselblad camera system is not in this device because the company is trying to cut cost.

According to popular Weibo leakster, @DCS, the name “OnePlus Ace Pro” is already official. Furthermore, the blogger confirms that this device will come with the Snapdragon 8+ Gen 1 chip. In addition, the leak suggests a 150W = 100W fast charging, a large battery, up to 16GB of RAM, and the price will be a surprise.

According to previous reports, the OnePlus Ace Pro will come with a decent 4800 mAh battery. The report also claims that this device will use a 150W fast charging solution from Ouka. In addition, this smartphone will be the first to carry some ColorOS 13 underlying optimization features. There will also be a significant improvement in the background retention rate of the new phone.

In May of this year, OnePlus released the OnePlus Ace racing version, equipped with a customized Dimensity 8100-MAX chip, supporting up to 12GB LPDDR5 memory + 256G UFS 3.1 flash memory. The device uses a 6.59-inch 120Hz LCD variable speed gaming straight screen with a 64MP main camera in its triple rear camera setup. The phone supports a 5000 mAh battery with a 67W super flash charge. This device gets up to 80% charge in 29 minutes.