Nubia is gearing up to introduce the Red Magic 7S series and follow its usual tendency of mid-year releases for its gaming smartphone series. In fact, the company does not have much choice as other gaming brands are already moving on and launching new gaming devices with the Snapdragon 8+ Gen 1 SoC. ASUS took the spotlight today with the release of its ROG Phone 6 and ROG Phone 6 Pro. In the next few weeks, we may see the release of the Nubia Red Magic 7S series, Lenovo Legion Halo, and the new Black Shark 5S series. So, the gaming enthusiasts will have a lot of releases to follow in July! Today, the Nubia Red Magic 7S Pro paid a visit to the Geekbench benchmark. 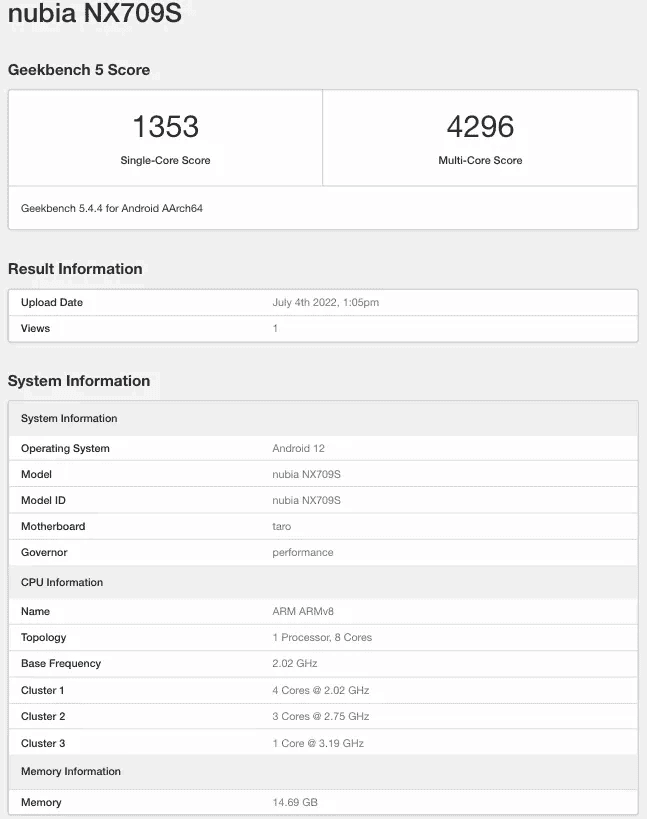 The new listing on Benchmark does not bring many surprises. After all, we already know the gaming series is bringing the Snapdragon 8+ Gen 1 SoC. However, if there were any doubts, these doubts are now gone. The device passed through the Geekbench with the NX709S model number. The device scored 1,353 points on the single-core tests, and 4,296 on the multi-core department. The device also has 16 GB of RAM and Android 12. We may see variants with 12 GB and 18 GB of RAM as well. After all, gaming smartphones are here to impress us with high numbers.

The Nubia Red Magic 7S Pro will launch on July 11 alongside the vanilla Red Magic 7S. The devices will have essentially the same design as the vanilla series. However, Nubia seems to bring a new white-colored variant with fancy details. The active fan is back as a signature feature in the series as well as shoulder triggers. The main difference between the 7S and 7S Pro is the battery capacity. The vanilla will bring a 4,500 mAh battery, whereas the Pro variant brings a 5,000 mAh battery.

We expect Nubia to keep teasing the device in the coming days. The device already passed through other benchmarks, showing impressive results.