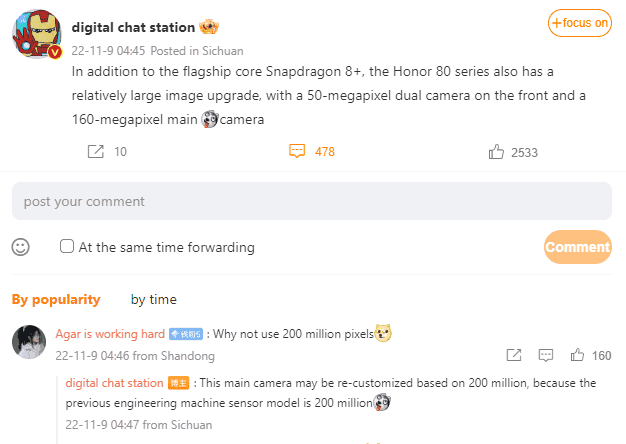 However, after his latest post, netizens were concerned about why it is not using a 200MP camera according to the initial report. @DCS responds that the company may re-customize this sensor to 200MP. He claims this because the engineering model sensor is 200MP.

Previous reports from blogger, @王子百ishitong said that the new Honor series will include three versions. It will have the Honor 80 SE, Honor 80 and Honor 80 Pro. These smartphones will come with MediaTek Dimensity 1080, Qualcomm Snapdragon 778G+ and Qualcomm Snapdragon 8+ Gen 1 processors respectively. Previous report also reveals that the Honor 80 series uses a 1.5K high-frequency dimming screen. Its charging specifications will continue to use 100W super fast charging. As for the Honor 80 SE and Honor 80, they will use straight screen and curved screen solutions respectively.

We can see that the positioning of the above three new models is very clear. The series covers all levels from entry-level to high-end. Thus, the series can meet the needs of different groups of people. It’s worth noting, though, that there may not be a Pro+ version this time around. Nevertheless, the available model does a great job.