When it comes to battery and charging capacity, there is no smartphone brand as careful as Samsung. The company has refused to go above 25W charging for its flagships. Very few Samsung smartphones support up to 45W charging. Considering that the industry is currently at 200W charging, Samsung is well behind. If you are an old smartphone user, you will understand why Samsung is this careful. Remember the Galaxy Note 7 incident? The company never got over the troubles. However, Samsung will develop other means of making its battery last longer. As the launch date for the Samsung Galaxy S23 series gets closer, there is more information about this series. 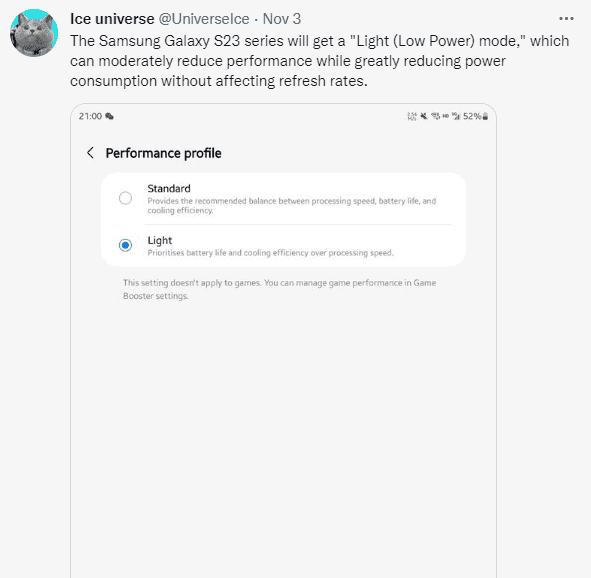 Popular Twitter blogger, @iceuniverse has revealed some information about the Galaxy S23 series. He claims that the Samsung Galaxy S23 series will come with a new “light” mode. This new light mode is a little different from the power-saving mode that we already know. The biggest difference between “power-saving” and “light” modes is that light mode does not reduce the screen refresh rate. The light mode will moderately reduce performance while greatly reducing power consumption. This can effectively improve battery life at the expense of performance.

Samsung Galaxy S23 series will be released at the Galaxy unpack 2023 event in San Francisco, California, USA in the first week of February next year. This is 3 to 4 weeks earlier than usual in previous years.

The upcoming Galaxy flagships will come with a couple of improvements. If the company hopes to take the fight to Apple, then these upgrades are not negotiable. However, there are reports that the Samsung Galaxy S23 / S23+ has almost no changes. This is quite disappointing considering the competition in today’s market. The report claims that the design is similar to the S22 series. The biggest change of the Galaxy S23 Ultra is the increase in the width of the middle frame. This also reduces the curved part of the screen and makes it closer to a micro-curved screen.