Huawei is still struggling to keep its smartphone business relevant in the global markets. In fact, the company is even falling in China with Honor taking a bit of its popularity. However, Huawei will not give up and keeps giving steps to find a route outside of the US ban. The company is developing HarmonyOS 3.0 for its smartphones, which will come as the third iteration of the company’s replacement for Android-based EMUI. The OS will deliver full integration with Huawei devices and also has compatibility with Android apps from the Huawei Mobile Store. A few months ago, rumors emerged suggesting a problematic development for HarmonyOS after an important leader left the company. Despite these rumors, the company seems to be pushing the development forward. Today, it has opened the HarmonyOS 3.0 Developer Beta for public recruitment. That means that everyone can apply for the developer beta program, but it does not mean everyone will be selected.

According to the official introduction, the main updates on the development side of HarmonyOS 3.0 Developer Beta are as follows:

Of course, the update is not available for all Huawei smartphones out there. But there is a comprehensive list of recent flagship smartphones including Huawei P50, P50 Pro, P50 Pocket, Mate 40, Mate 40 Pro, Mate 40 Pro 4G, 40 Pro+, Mate 40 RS Porsche Design. When it comes to the tablet segment, only the Huawei MatePad Pro 12.6-inch 2021 is among the supported devices list. There is a complete list with more details about the “model numbers” in the image below. 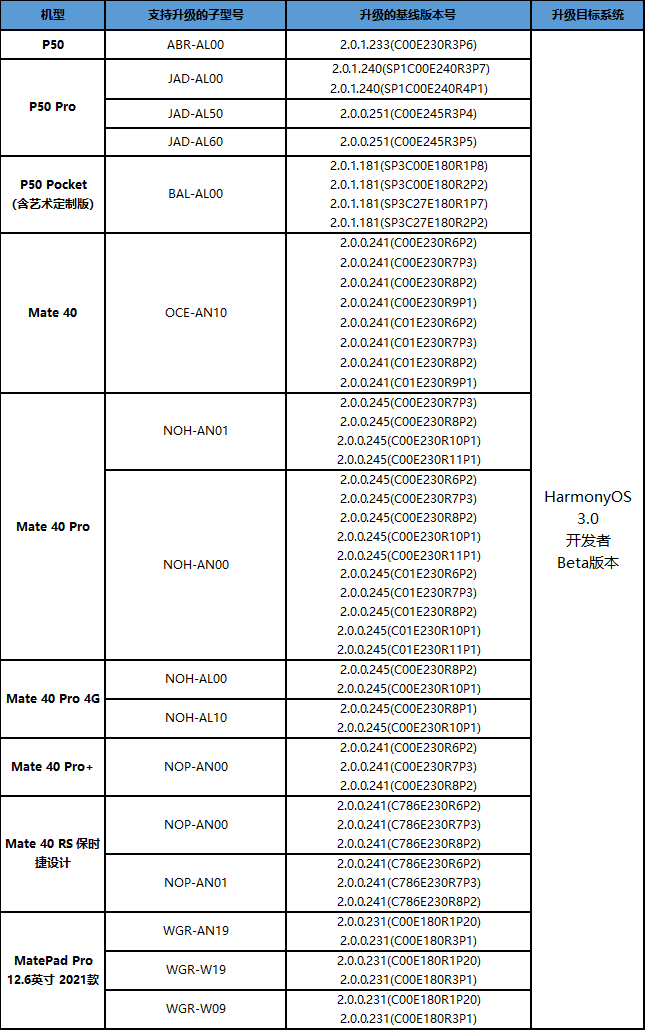 Only of the biggest challenges for Huawei is bringing HarmonyOS to global markets. The company needs to make it a relevant rival for Android and iOS. The company is still collecting the damages caused by the US ban, and currently is losing space in the market with the lack of 5G phones. However, there are big promises for the upcoming Huawei Mate 50 series.