A few days ago, there were reports that Google Stadia, the company’s cloud gaming platform will be close down at the end of this summer. This got a lot of Stadia users worried as they do not see any reason why Google Stadia will be shutting down. However, an obviously disappointed user asked bluntly. The users said

“*Sigh* (Incredible that I really have to ask this) Are you closing down soon?”

“Stadia is not shutting down. Rest assured we’re always working on bringing more great games to the platform and Stadia Pro. Let us know if you have other questions”. 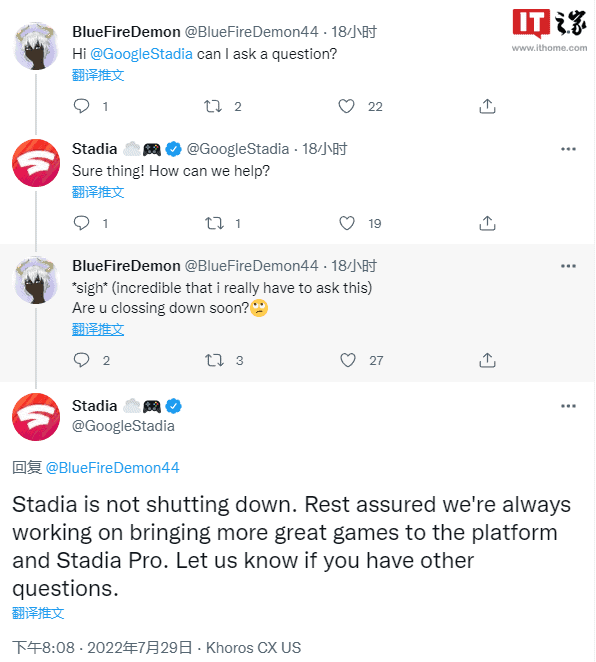 Last year Google Stadia closed its first-party studio to focus on making a game platform. However, Google Stadia vice president and product director John Justice left. Nevertheless, this did not stop Stadia. At the time, the company said “Stadia is still alive and well”.

Previous games such as “Supermassive Games”, “Quarry” and “Squanch Games” were supposed to be Stadia exclusives. However, for some reason, these games did not make it and they became traditional games. On top of that, a Business Insider report says Google is currently “de-prioritizing” the platform’s consumer business to focus on white-label deals with brands like Peloton, AT&T, and more. Google has yet to respond to the report.

According to reports, Google disclosed in the latest news that the company will postpone its plan to replace third-party advertising cookies until 2024.

“The most consistent feedback we’ve received so far is that more time is needed to evaluate and test the new privacy sandbox technology before it can replace cookies in Chrome.” Anthony Chavez, VP of Privacy Sandbox at Google. “As developers adopt these APIs (application development interfaces), we’re now leaning toward phasing out third-party cookies in Chrome starting in the second half of 2024,” Chavez said in a Wednesday blog post.

A cookie is a small piece of code embedded on a website that can be sent to a visitor’s browser and remain in the browser while people visit other websites. This behaviour has greatly contributed to the digital advertising ecosystem, allowing advertisers to track users across different websites to deliver targeted ads.

Google said last year that it would stop supporting cookies in its Chrome browser in early 2022 once it understood the needs of users, publishers and advertisers and developed tools to provide workarounds. But in June 2021, Google delayed the plan, giving the digital advertising industry more time to develop a plan for more privacy-focused, targeted ads. The new plan shows it will take another two years for the company to implement the plan.

The delay comes at a time when advertising and e-commerce companies have been hit hard by new privacy rules. The rules limit the ability of advertisers to obtain iPhone user identification numbers, making ads less accurate. Earlier this year, Facebook announced the plan would ultimately cost it $10 billion this year. In addition to this, U.S. and U.K. lawmakers have recently reviewed Google’s dominance of the ad tech ecosystem.

Chavez wrote in a Wednesday blog post that Google is also expanding the testing of its Privacy Sandbox API. This “sandbox” is actually a project launched in 2019 to find an alternative to cookies. However, Google wants as little impact on content publishers and other relevant parties as possible. Last year, Google claims it is “extremely confident” in third-party alternatives. However, advertisers are not so keen on the change

Developers can already test these APIs, but starting in early August. Testing will expand to millions of users around the world and will be generally available through Chrome. It will arrive in the third quarter of 2023 — about a year from today.