Elon Musk is definately givng Twitter a facelift. A lot of things are changing around Twitter. We all know that Elon Musk’s personality is full of drama. Since his takeover of Twitter, there is barely a day that he doesn’t give us what to think about. In his first line of action, he fired four Twitter executives including the former CEO. Subsequently, he told Twitter employees that they had until November 7 to monetize Twitter’s verification. Initial reports reveal that verified users will have to pay $20 monthly. However, after due consultations, this fee has been reduced to $8. It appears that two things are bound to happen. One is that the verification fee is here to stay. The other is that the monthly fee will be $8, and nothing anyone can do about it.

In a recent tweet today, Elon Musk didn’t seem to bother about the complaints from users. “To all complainers, please continue complaining, but it will cost $8”, he tweeted. This means that everyone can complain but the price ain’t changing. Earlier, Musk said he would launch an $8 Twitter subscription service that would authenticate subscribers, increase the visibility of their posts, and allow those subscribers to see fewer ads. 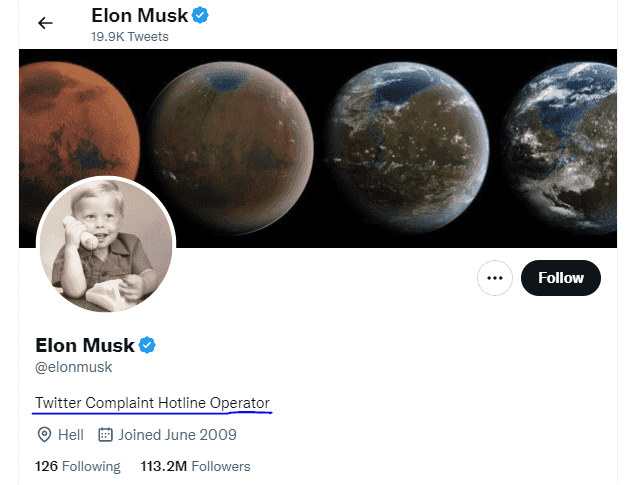 Unlike what many think, the verification tick is not only for celebrities. It is also for organizations or individuals. These are people with the tendency to attract several followers. These individuals or organizations usually have fake accounts created by criminals. The verification tick is a means to identify the official account from the parodies.

In addition, Elon Musk changed his Twitter certification to “Twitter Complaint Hotline Operator”. He also set his display image avatar as a little boy answering the phone. A series of reform measures after Musk entered Twitter caused dissatisfaction among many users. At the moment, it doesn’t seem that Musk cares about user dissatisfaction.