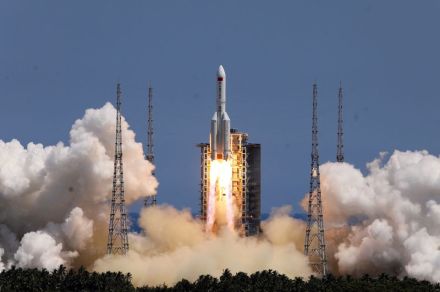 A Chinese rocket booster has made an uncontrolled re-entry into the atmosphere for the second time this year. Pieces of the booster from a Long March 5B rocket were confirmed to be making a re-entry by the U.S. Space Command on Friday, November 4, and fell into the Pacific Ocean. It was fortunate that the booster fell into the ocean and did no damage, as observers were worried that it could have hit a wide range of regions from Northern and Central America to Africa or Australia.

Debris from a previous Long March 5B rocket made an uncontrolled descent in July this year, with some debris reportedly landing close to villages in Malaysia and Indonesia, but no reports of injuries were filed. This time, the booster was from a rocket used to launch the third module of China’s new space station on October 31.

The danger of allowing rocket parts to fall uncontrolled through the atmosphere has been condemned by NASA officials as an unnecessary risk. “It is critical that all spacefaring nations are responsible and transparent in their space activities and follow established best practices, especially, for the uncontrolled re-entry of a large rocket body debris — debris that could very well result in major damage or loss of life,” NASA Administrator Bill Nelson said, as reported by the New York Times.

The Long March 5B rocket is designed to allow its first-stage booster to make an uncontrolled re-entry, which Chinese officials claim is safe, as most components burn up in the atmosphere. However, experts say that it is irresponsible and dangerous to allow these uncontrolled descents to go ahead.

“Today’s uncontrolled #LongMarch5B re-entry underlines the growing risk for critical infrastructure both in space & on the ground posed by unsustainable spaceflight practices,” European Space Agency Director General Josef Aschbacher wrote on Twitter. “In the past decade, about 100 pieces of large debris have re-entered the atmosphere each year, with a total annual mass of about 150 metric tons. We must work on technology to better track and predict and mitigate satellites and rocket bodies heading for uncontrolled re-entries.”

As a result of the falling debris, Spain had to briefly close parts of its airspace as the debris passed through, Reuters reports.