A few years ago, when buying a new smartphone, most of us were looking at select features, such as display, camera, battery capacity, etc. Agree that no one was paying attention to the heat dissipation. Now, not only cooling but also some other features are very important when making a purchase decision. Today, the AnTuTu benchmark platform released its monthly report, showing the best smartphones in three categories – premium, mid-range, and low-end.

We mentioned the heat dissipation of smartphones because in the list for June, the gaming phones lead it. As you know, gaming smartphones come with boosted cooling systems.

Not surprisingly, the Black Shark Gaming Phone 5 Pro ranks first. It has an average score of 1,040,111. What’s interesting, the CPU and GPU performance is not outstanding. But what makes this handset stand out is its memory. Thanks to the SSD+UFS 3.1 solution, the storage is able to quickly read and write, which ensures the best performance in comparison to others. 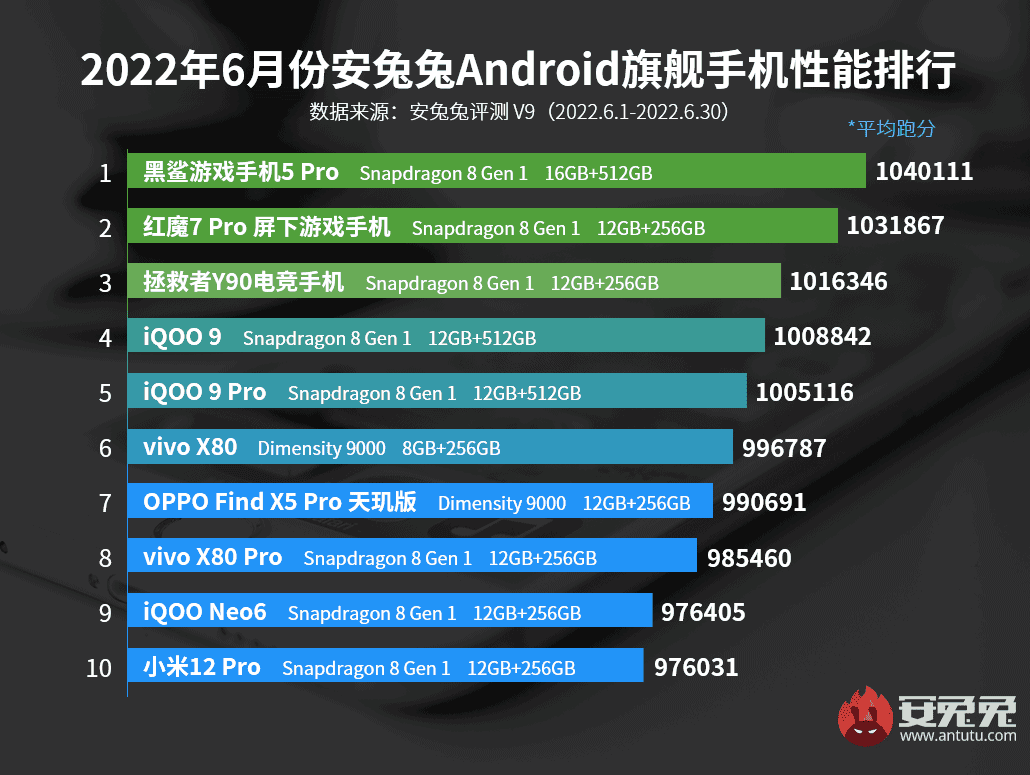 Another gaming smartphone, the Red Magic 7 Pro Under-Screen Camera Version has an average score of 1,031,867. Interestingly, when looking at the CPU and GPU scores, it has no equals.

In third place, we can see the Lenovo Legion Y90. Though it combines the two solutions of Black Shark and Red Magic (SSD+UFS 3.1 combination (640GB top version only) and active air cooling), it could only land in the third position.

If Qualcomm chips dominate in the flagship segment, MediaTek sees no rivals in the sub-flagship field. The Dimensity 8100 is almost in every model that appeared on this list.

Well, the OPPO Reno8 Pro+ ranks first. It sports the MediaTek Dimensity 8100-Max processor, with an average score of 822,915. 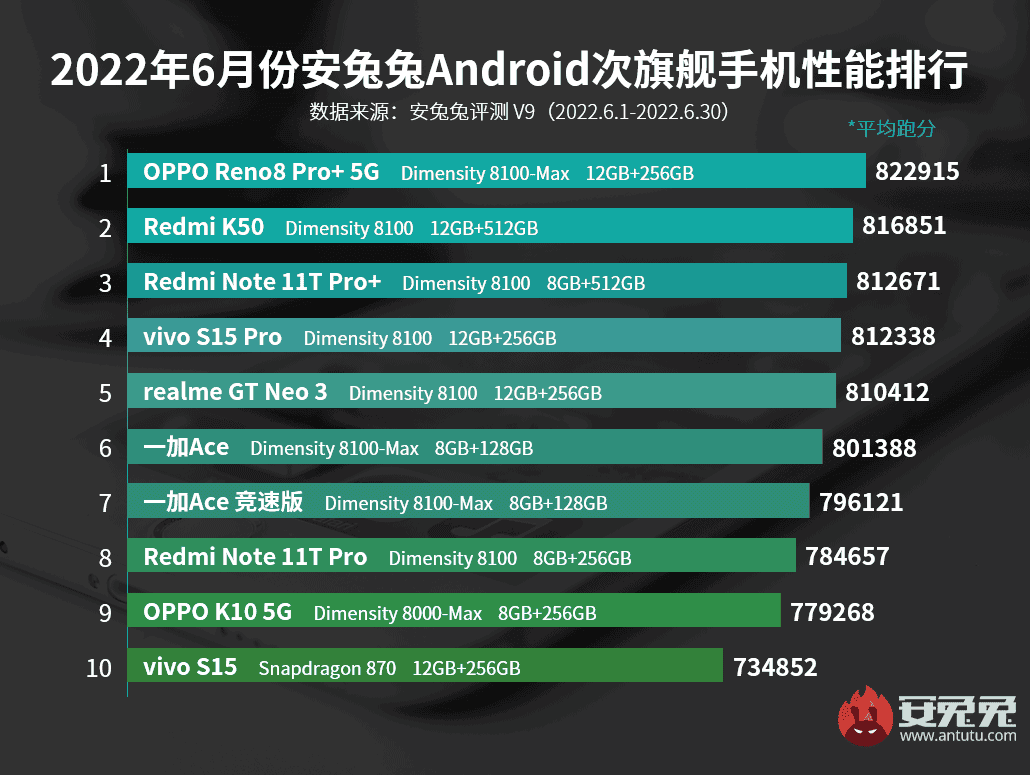 Not long ago, Qualcomm released the Snapdragon 7 Gen 1, which is built with a 4nm process and has an upgraded CPU architecture. It consists of an A710 super core at 2.4GHz + three A710 large cores at 2.36GHz + four A510 small cores at 1.8GHz. It also integrates the Adreno 662 GPU, which has a 20% higher graphics rendering speed in comparison to the Snapdragon 778G. 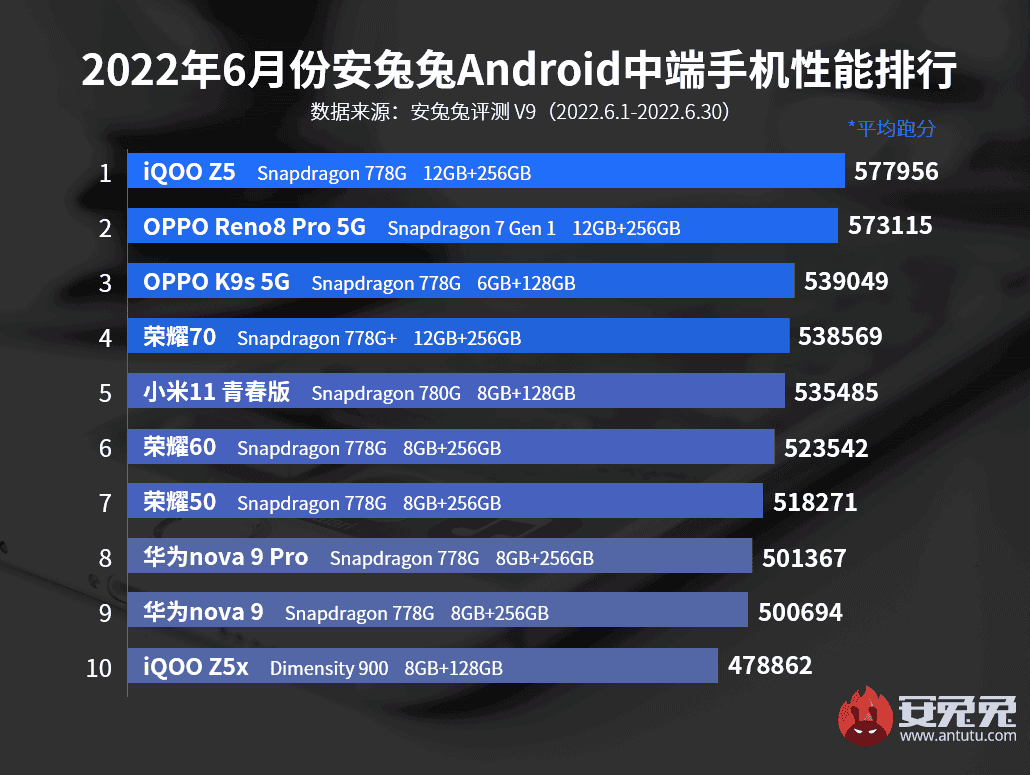 Why we say this is that though the former one came later, the Snapdragon 778G has the most representatives here.

The first model is the iQOO Z5. It sports the Snapdragon 778G with an average score of 577,956. But what’s more interesting, this handset has been in this position many times. Apart from the mentioned chip, the phone also boasts LPDDR5 (6400Mbps) memory and UFS3.1 (V6 process) native storage.

The second place is the OPPO Reno 8 Pro, which comes with the Snapdragon 7 Gen 1 with an average score of 573,115.

The rest of the phones feature either the Snapdragon 778G or the Dimensity 900 chips.