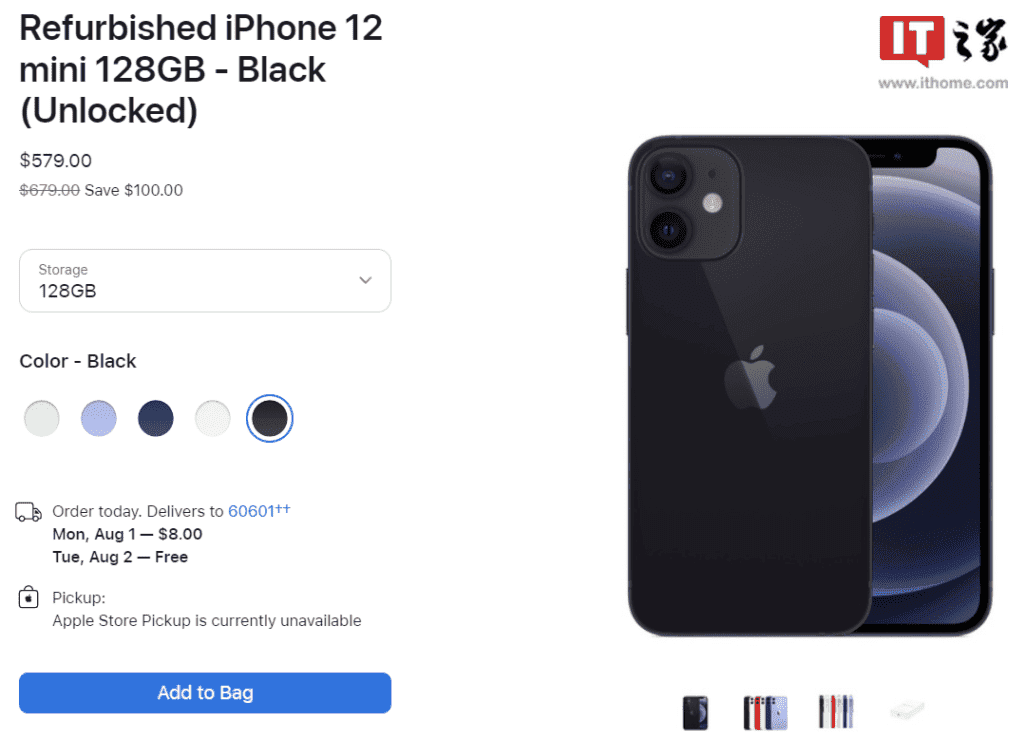 It is worth mentioning that Apple is still selling the new 128GB version of the iPhone 12 mini. The brand new version of this smartphone is selling for $649. This means that you get to save $70 if you choose to purchase the refurbished device.

Apple says refurbished iPhones have been thoroughly tested and cleaned. Furthermore, the company claims that these devices are “virtually indistinguishable from brand new iPhones.” The iPhone 12 mini uses a 5.4-inch OLED display and it uses an A14 bionic chip. This device supports 5G network and also comes with a dual 12MP rear camera.

Although shipments in the Indian smartphone market have been declining in recent quarters, market research agency CMR said that in the second quarter, iPhone shipments in India reached 1.2 million units. Comparing this figure to the market situation of last year, there is a 94% increase. Furthermore, Apple’s market share will increase by 4%. The iPhone has been operating in India for many years, but the price of the iPhone is significantly higher than the mainstream price band in India. For this reason, the sales of the iPhone in India have been quite poor. However, iPhone sales in India hit a record high of 5.4 million units last year, and sales have finally grown significantly since the second half of last year. Nevertheless, in terms of current sales volume, it still cannot squeeze into the top five in the Indian market.

In the second quarter of this year, the Indian smartphone market was affected by inflation, and residents’ willingness to purchase was significantly reduced. In addition, due to the shortage of supply chain, mobile phone manufacturers give priority to providing products with higher ASP. This is suppressing the shipment of low-cost smartphones. According to Canalys, in the second quarter of 2022, Indian smartphone production shipments hit 36.4 million units, down 5% from the previous quarter.

Apple’s main shipments in the Indian mobile phone market were the iPhone 12, iPhone 12 mini, iPhone 13, and iPhone 13 mini. The two generations of models together contributed nearly 1 million units and they are all made in India.

According to Canalys, in the second quarter of 2022, global smartphone shipments fell by 9% year-on-year. Manufacturers were forced to review their development strategies in the second quarter as the outlook for the smartphone market faltered. Economic turmoil, sluggish demand, and overstocked inventories have prompted manufacturers to quickly adjust their product mixes in the second half of 2022. Consumers’ budgets are tightening, and part of their demand will shift to low-end products. Furthermore, mid-end products that are oversupplied will be the price range where manufacturers focus on adjusting product releases.

For now, the decline in smartphone demand is of great concern across the supply chain. Although supply and cost pressures for parts are easing, there are still some concerns about logistics and production. There are issues with import laws and regulations in some emerging markets and tightening of customs.